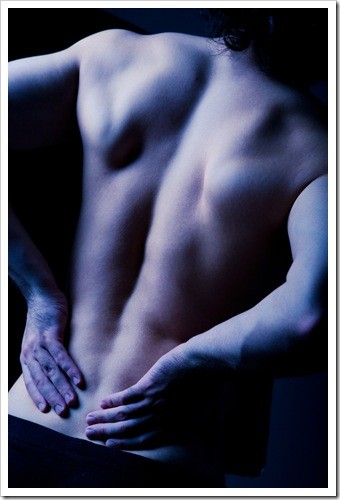 After upper-respiratory infections, back pain is the second most common reason for visiting a doctor. It will affect 80% of us at some point in our lives, and half of all adults are estimated to suffer this every single year, with over 10% of people suffering ongoing bouts of low-back pain.

The reason low-back injuries are so prevalent is that this is a highly unstable part of the spine, much like the neck. Whereas the thoracic spine is supported and stabilized by the rib cage, the upper and lower spinal areas are on their own, so to speak. It is to our benefit in one way because it allows us greater flexibility to carry out more tasks, but it also makes us vulnerable to injury.

Having said that, provided the low back is cared for, it is able to offer immense support and withstand great forces. If that were not so, power lifters would not be able to do what they do, hoisting hundreds of pounds of weights off the floor. On the other hand, if your low back is weak or misaligned, even the lightest of movements can create problems.

The old approach to low-back pain and injury was to let it heal on its own, as it was assumed this happened naturally. Recent research shows that this is not the case; it may ease for a while but often returns. This points to the importance of promptly attending to any low-back pain through chiropractic care to prevent a recurrence.

Low-back pain can result from many conditions, such as sprained ligaments, strained muscles, ruptured disks, myofascial pain (muscular trigger points), and inflamed joints. It can happen following an obviously traumatic incident such as during hard sport, or it can be triggered by something as simple as sneezing where a weakness existed previously. It may also be the result of conditions such as arthritis, bad posture, obesity, mental stress, kidney stones, kidney infections, blood clots or bone loss.

This great variety of causes means it is very important not to assume the reason for any low-back pain you may be experiencing. Professional help should be sought to identify the problem, or to at least rule out anything more serious. Doctors of chiropractic are specially trained in assessing low-back pain, and offering appropriate treatment.

Chiropractic Treatment of Low Back Pain

Low-back pain is bread and butter to a doctor of chiropractic, and usually treated with comparative ease. Adjustments are made to the lower lumbar vertebrae and pelvis, thus returning normal functioning to your bones and joints. Numerous studies have shown that chiropractic is the most effective treatment for low-back pain, being cheaper to wlpdrpatister and producing far better long-term improvements. This is because it is only chiropractic that seeks to realign the spine and re-establish normal vertebral motion. Conventional treatments such as muscle relaxants, pain killers and bed rest do no more than temporarily mask the symptoms, and do not attend to or correct the root cause of the problem.
⇐ Headaches Iliotibial Band Syndrome ⇒